Striking a Blow Against Magnesium Deficiency

Most people have only a vague notion of what magnesium deficiency is, and the health problems it can cause.
Yet an inability to get enough of this vital mineral is commonplace, scientists say. Although fewer than 2 percent of Americans meet the clinical definition of magnesium deficiency, 75 percent lack the minimum daily requirement of the mineral, studies suggest.
Magnesium-deficiency symptoms are usually undetectable until levels become really low. At that point, you can find yourself experiencing fatigue, muscle cramps, mental disfunction, irregular heartbeat, high blood pressure, asthma, or osteoporosis — brittle bones. The mental disfunction that researchers have linked to magnesium deficiency consists mostly of apathy and lack of emotion, although confusion and delirium sometimes occur.
Studies suggest a connection between irregular heartbeat and another condition associated with magnesium deficiency — an imbalance of potassium levels inside and outside heart muscle cells.
Magnesium deficiency also may increase the risk of osteoporosis and bone fractures, studies have suggested, although scientists have noted that many factors can play a role in these problems.
Research has shown two links between a shortage of magnesium and asthma. One is that people with severe asthma have higher rates of magnesium deficiency. The other is lower magnesium rates among all people with asthma than in the general population.
If you think you might have magnesium deficiency, see your doctor. A simple blood test will tell you for sure.
Even if you aren’t one of the 2 percent whom doctors diagnose as clinically magnesium-deficient, you’re likely to be getting too little of the mineral, so think about making some diet changes.
You’ll find magnesium in pumpkins, spinach, artichokes, soybeans, white beans, black beans, navy beans and great northern beans, in Brazil nuts, almonds, cashews and peanuts, in tofu, brown rice and bran cereal.
These foods are also high in other nutrients that are good for your health. This means that including them in your diet not only lowers your risk of magnesium deficiency, but also promotes your overall well-being.
In addition to changing your diet, you can increase your magnesium levels by taking a supplement. A top choice is Schaeffer Nutraceuticals’ viproactive® magB6. Not only does it contain magnesium, but also other nutrients that work in tandem with magnesium to address the problems associated with lack of magnesium. These include zinc, calcium, Vitamin B6 and Vitamin D.
Zinc helps ensure normal cell division and protects cells from oxidative stress. Calcium contributes to bone maintenance, neurotransmission, and energy-yielding metabolism. Vitamin B6 promotes energy-yielding metabolism, the regulation of hormone activity, and nervous-system and immune-system functioning. And Vitamin D helps maintain immune-system functioning. 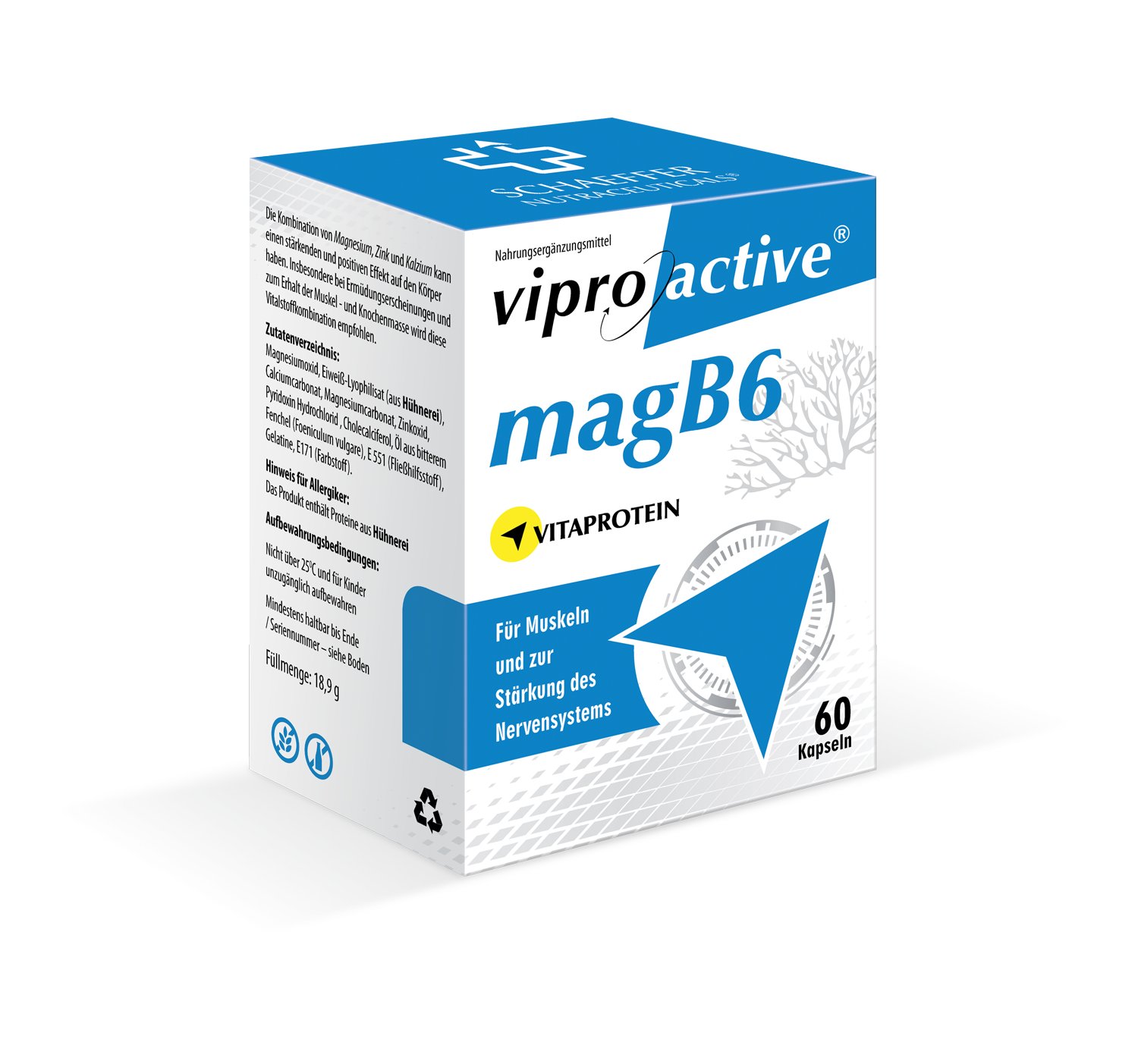